Should you get another dog? People who have one pup may come up with a plethora of excuses for why they could never add a second. Either it’s too expensive. Two dogs would be way too much to handle. Maybe they worry that the dogs wouldn’t get along. However, studies have shown that it is actually better to have two dogs as opposed to just one. The cost difference is not significant. As long as you find another dog that gets along with your current furry friend, you can end up making both (and yourself) live more fulfilling lives. There are plenty of reasons for doubling down on your dog quantity. So let’s take a look at the most prominent five arguments. 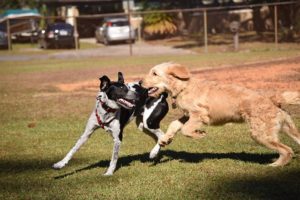 Your Dog Will Be Happier

My dog loves to be around other dogs. Whenever she sees another dog, whether on a walk, or from the window of our car or house, she always wags her tail, wiggles her butt, and looks at me hopefully, as if to say “Can I please go play with my new friend?”. Dogs are pack animals, and therefore are much happier, socialized, and friendly when they can be around other dogs frequently. If a dog is often left on his or her own, they will get lonely and sad. Have you ever wondered why you are supposed to introduce your new puppy to at least 100 new people and dogs? It is because studies have shown that dogs who are socially restricted tend to be more anxious and less amiable. Giving your little pup a friend to keep them company will increase your animal’s joy as well as your own. 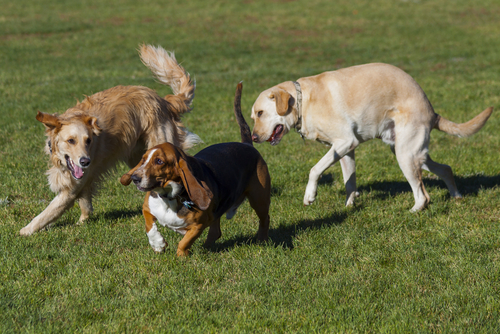 Both Dogs Can Have Play-dates Whenever and Wherever

Similar to children, dogs need to have playtime in their lives. Since dogs are social animals, they use play to bond with other dogs, to improve their agility, to reward themselves, and to have a positive experience. Some would argue that dogs can achieve these outcomes by interacting with humans, but the truth is that there is nothing quite like two dogs playing, as they bow, growl, bark, and mouth at each other. These encounters are essential to their normalcy. Having two dogs in the house can allow for your dog to experience the play he or she needs, whenever he or she wants! Plus, their silly interactions will most likely leave you cracking up with laughter, completely entertained for hours on end. 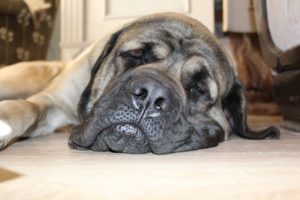 Say Goodbye to Your Dog’s Pent Up Energy

Every dog lover who is currently flying solo has had this experience like this. Coming home after leaving the dog alone to find a beloved belonging or part of the house trashed. My personal nightmare occurred when my dog chewed through my parents’ refrigerator hose. Which caused their downstairs to flood while we were all out for dinner. When dogs are alone, they often get bored and restless. If you have an energetic dog, you may find yourself walking your dog up to three times a day in order to keep them from chewing through your house. However, this need not be the case if a dog has a doggie companion. Anyone who has gone to a dog park knows that nothing relieves a dog’s pent up energy like two dogs going at it. They will chase, tug, roll, and tumble until they have nothing left. 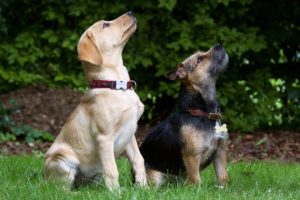 Your Dogs Will Act as Trainers

Older pups that are well behaved will often teach younger dogs how to act, using body language, barking, and emulation. One of the reasons why puppies shouldn’t be separated from their mother before 8 weeks of age is because the mother will teach her babies how to eat, how hard they can bite without it being painful, and how to play with one another. She will reprimand and reward them based off of their actions. This can also be the case for older pups who encounter younger dogs. So, if you currently have an older pup and would like to add a puppy to your family, know that you will have an assistant who can help you along the way. On the other hand, if you have a young dog that needs some shaping up, consider adopting a well behaved older pup to show him or her the ropes. 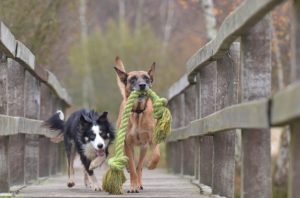 You Can Give a Dog a Home

Ok. So this last one isn’t necessarily a scientific argument for getting another dog. Rather, its an argument from the heart. There are so many lovable pups out in this world who have been given up for adoption because someone didn’t have the time or love in their life for that animal. If you already own a dog, chances are that you can handle another one. Having a second pooch isn’t a burden at all. Rather, it can make your current fur-baby happier, more relaxed, socialized, and obedient! If you decide that there is room in your heart and in your home for a second dog, your pup will end up thanking you and you can bet that you will also be thanking yourself.

We Have Competitive Pricing and Fast Shipping On Thousands Of Products For Your Dog Or Cat. Shop Now!

This TikTok Of A Dog Sitting In A Boat Made Of White Claw Boxes And Cans Is Incredible
Jul 31, 2020

Meet Norman, The Adorable Pomeranian-Husky Mix The Internet Has Fallen In Love With
May 10, 2019